Last week I spent some time at the cabin getting it fluffed up. Still unsure if the final plan is rent or sell or live in, but no matter what, there are always things to be done in a house.

First up was glue the closet door back together upstairs. Now, not one door in this house matches another. This closet is under the eaves so the door has been cut down to fit the opening. Over the years it had been sticking, the parts came loose and then it really stuck which meant basically you had to hold the door together as you opened it. 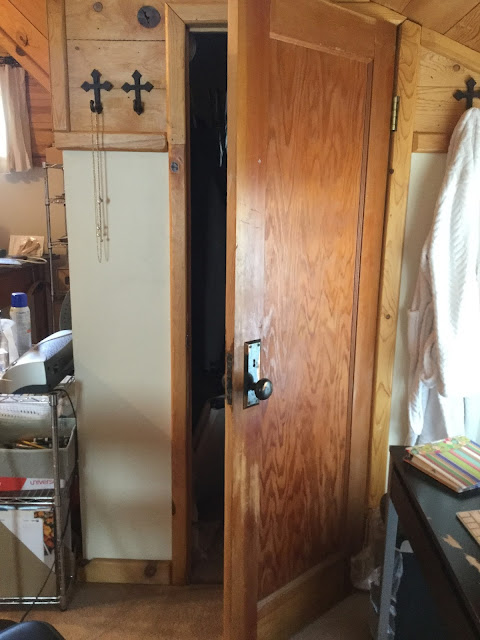 The upper right side of the door always hung behind while the rest opened up.

This should have been an easy-peasy fix. Pop the pin out of the hinges and pull the door off to glue it.
But no.  Look: 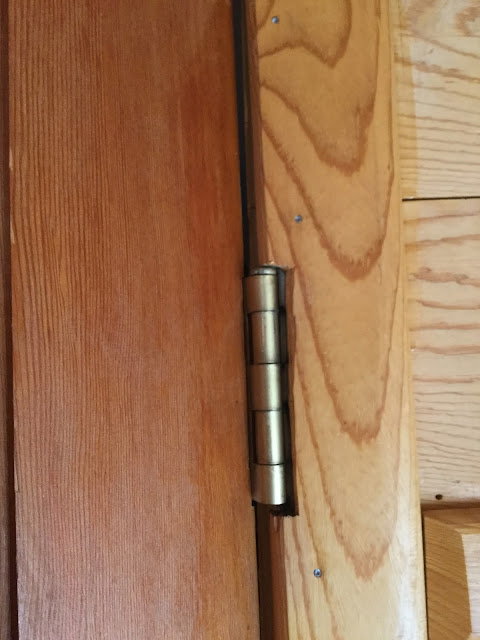 Yep. Some genius chiseled out a spot in the wood for the hinges, making it impossible to remove the door without completely removing the hinges.

So, off with the hinges. And the door.  Liquid Nails to the rescue and Voila! door repaired.

Next up was the side mud room door. 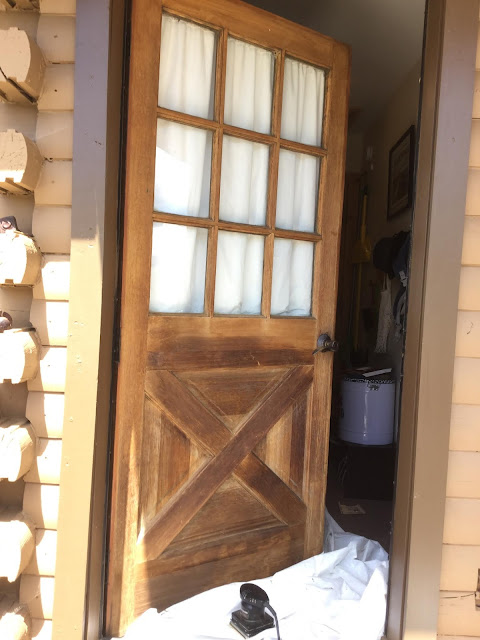 The wood had not been painted on that door for easily 15 years, possibly longer. Talk about weather beaten. I started to sand it but realized there would be no door left if I got rid of all the grain. Instead I patched, sanded a bit, and primed it. 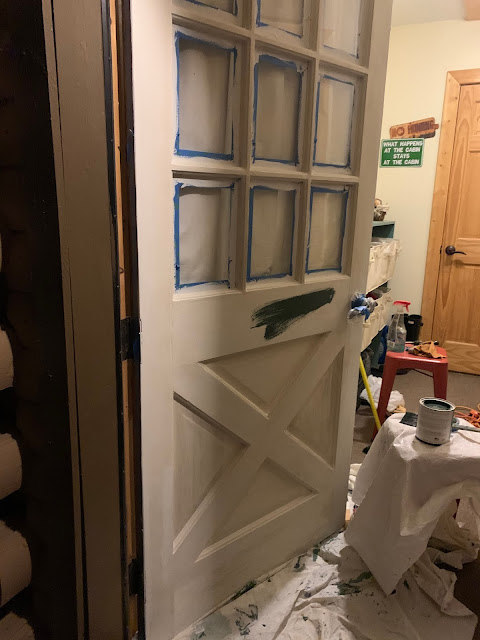 Primed and ready for paint.
Yes, I was lazy and didn't even bother to remove the door from the hinges.

Two coats of paint later, look!!  Gives the whole side of the cabin a finished look. Bunny says it looks very outdoorsy and reminds her of REI. I guess that's good. 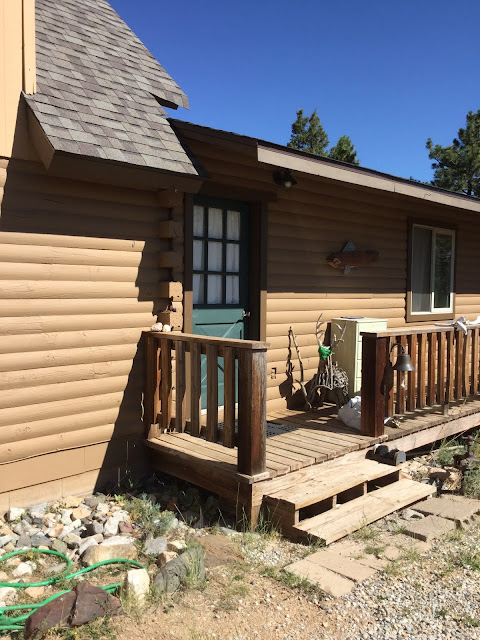 Slowly getting away from the completely neglected look.
Notice my deer planter is wearing his mask.
They are mandatory in Colorado.

Since the mud room door was spiffed up I decided to move on to the shelving unit in there. This shelf came with the cabin and was painted/stained a dark brown with lots of paint marks and scratches. Ugly but very serviceable. 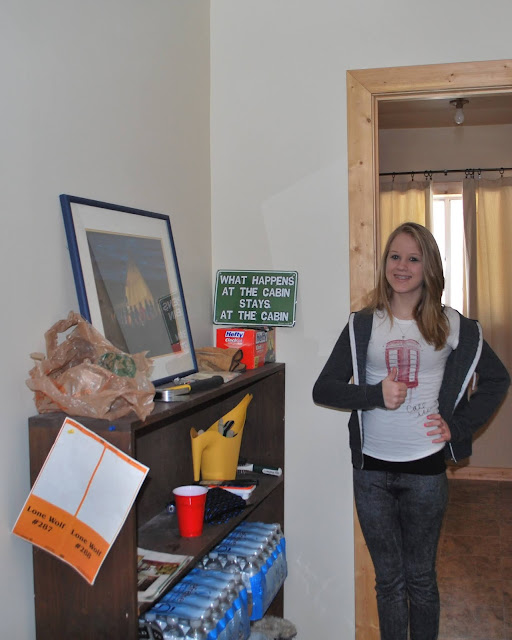 An oldie but goody of Bunny and the mud room shelf.

I used this opportunity to get rid of all the half used/almost empty cans of Chalk paint by mixing everything together. The end result was a very pretty green/teal and Whoa! what an improvement. 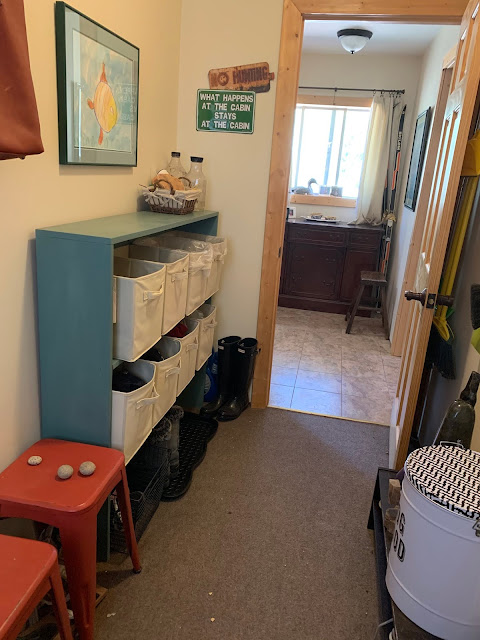 So much brighter and happier looking.

On a roll, I hung a sign that had been at my parent's house(s) for a million years. I believe the San Antonio neighbors gave it to them back in the 1960s.  Made in memory of a San Miguel trip, I'm sure. When Mom's house was sold, I couldn't bear to leave it behind. Instead of hanging over the garage door, it now graces a spot over my basement door. 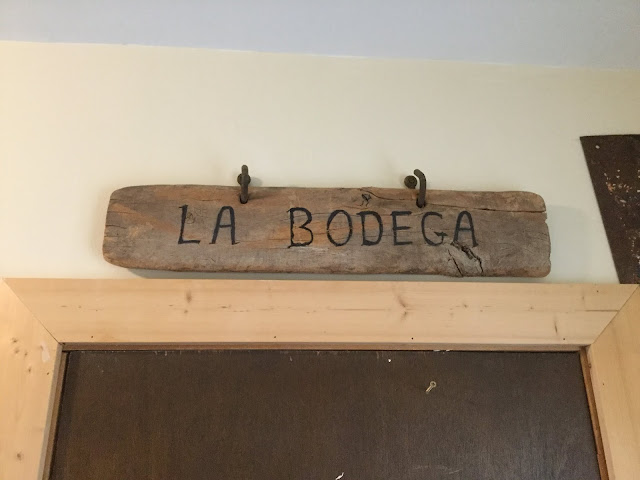 I'll have to get the accurate history behind this sign.
For a good 40 years I thought the words were burned into the driftwood.
Maybe five years ago I realized they were just written on with a black Sharpie.

And, to highlight the week of fluffing, I got a call from the septic company. SO EXCITING! After being on the waitlist for almost a YEAR, they are finally coming out. When we bought the cabin it had been empty for a few years, the owner was in hospice, the wife didn't even know where the septic clean out was, so we (foolishly) said...no worries, it all works now. Eleven years later I have tried on my own with the metal detector to find the clean out with zero success. Nightmare septic system stories got me motivated to have it found. Best to be proactive with these kinds of things.
Sooooo....sometime tomorrow Mountain High Septic will come do their magic. I hope. Crossing my fingers. Hate dealing with the unknown. Everyone say their prayers for me. A good septic system is awesome. a failing one is an expensive mess.

Here's to a fluffed cabin and an empty septic tank. Everyone have a great week and wear your masks.

Posted by Nancie N Bartley at 4:00 AM No comments: